On January 19th, 2019, Manny “Pacman” Pacquiao will take on Adrien “The Problem” Broner live at MGM Grand Garden Arena in Las Vegas. The bout for the Welterweight World Title will be broadcasted by Showtime PPV and ITV in the US and UK respectively. However, the channels are geo-restricted to their own countries. Therefore, follow this guide as I will show you how to watch Pacquiao vs. Broner live anywhere in the world. 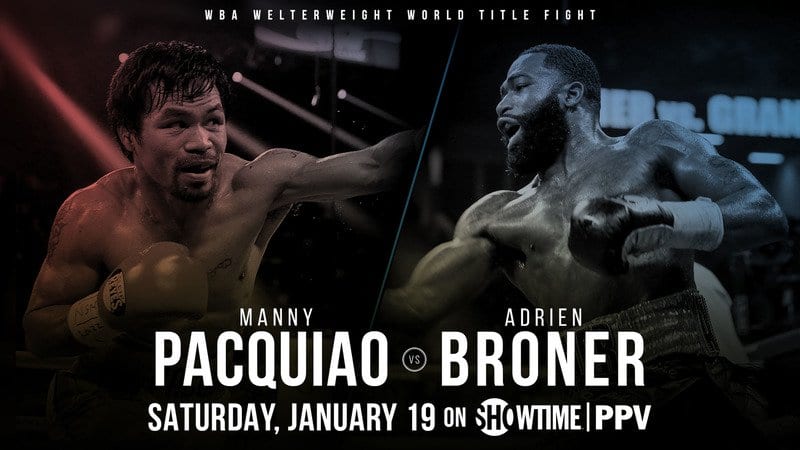 How to Watch Pacquiao vs. Broner Live Online

These are the official broadcasters of Pacman vs. The Problem:

How to Watch Pacquiao vs. Broner Live Online in the US

Showtime will exclusively air the fight live on Showtime PPV in the United States. This is great news for boxing fans living in the country. The cost of the fight is going to be approximately $65 which is not too shabby for such a mega fight. Moreover, we know that Showtime has plenty of commentators who will take your streaming experience of the fight to a whole new level. You can watch the event as soon as you purchase it using the Showtime app on Amazon Fire TV, Amazon FireStick, Android, iOS, PC, Mac, Smart TV, Apple TV, Roku, and Xbox One.

Now, for those unfortunates living outside the US, I have a solution for you. All you need is a VPN such as ExpressVPN to spoof your online location and access Showtime wherever you are. You can select a VPN server in the United States and download the Showtime app. Then, you will be able to purchase the fight via PPV and watch it live regardless of where you might be.

How to Watch Pacquiao vs. Broner Live Online in the UK

This world title fight will be available live on ITV Hub where you can watch the full undercard and main event for FREE. That’s good fortune for boxing streamers provided they live within the UK borders. If ITV Hub is your pick, then you can stream Pacquiao vs. Broner on PC, Android, Mac, iOS, Roku, Smart TV, Amazone Fire TV/Stick, and Apple TV (via Airplay from iOS devices).

If you’re a British expat or just happen to be outside the UK by that time, you should get a VPN immediately. A Virtual Private Network will let you tap into UK servers no matter where you are. Once you do that, you’ll take on a British IP address and have access to all sorts of UK content including ITV Hub. To do so, I highly recommend ExpressVPN as it has blazing fast servers in the UK and all around the world. Give it a try, it has a 30-day money back guarantee in case you don’t get too fond of it.

Manny vs The Problem – Preview

Pacquiao vs. Broner – What You Need to Know

Both fighters are very confident going into the event. Some say that Pacman has an advantage due to his age and experience and others believe in Broner as he has the same style as Mayweather. What do you think? Well, we just have to wait and see for ourselves. For the time being, here are the full details of the event:

The Pacquiao vs Broner fight will certainly be interesting. It’s a veteran vs. an underdog who fights like Mayweather who Pacquiao lost to back in 2015. Will Broner be able to overcome the odds and add this win to his outstanding resume? You will have to tune in to see who takes home the win on January 19th!