When we say WWE, we directly think of Wrestlemania, especially when it’s April. Last year, and thanks to the pandemic, we didn’t enjoy the Super Bowl of Wrestling Entertainment. The event was a unique two-day event held behind closed doors at the WWE Performance Center, where no fans were present. However, on April 10 and 11, 2021, we’ll get the Wrestlemania we’ve been waiting for. Such an event demands global reach, and it sure did get that. So, if you don’t know where and how to watch Wrestlemania 37 live online, follow this guide, and we’ll help you out. 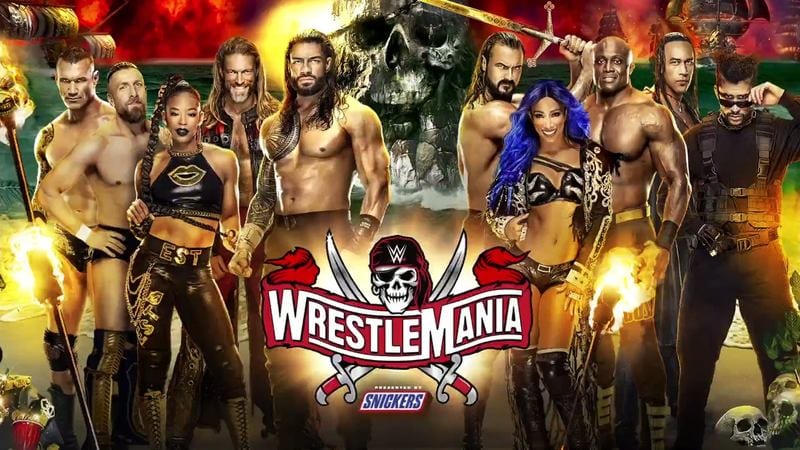 WWE adapted to the restrictions brought on by the Coronavirus (COVID-19), which lead to hosting last year’s Wrestlemania at their performance center. No fans were allowed, which might give a hint that the show would fail.

However, unexpectedly, it didn’t. In fact, Wrestlemania 36 shattered viewership records; what else would fans do other than stream the show online. Moreover, the historic WWE event also saw the most social media interactions for a single WWE event.

Last year, ‘WrestleMania Week’ saw WWE achieve a whopping 967 million video views, all thanks to its WWE Network platform and other broadcasters around the world. This time around, we have to see how many will tune in to the Biggest Stage of Them All.

We have to note that every single channel broadcasting Wrestlemania is restricted to specific locations. Streaming services and websites apply geo-restrictions to maintain copyrights. They use geolocation techniques such as examining your IP address to determine your exact location. If you’re not within its area of coverage, the channel blocks you on the spot.

Now, that’s a problem we’ll be fixing later on in the article. As for the time being, here are the channels broadcasting Wrestlemania 37:

Those in the United States might be accustomed to watching WWE PPVs on WWE Network, but that all changed. The promotion’s own platform went dark last month after airing the final PPV before Wrestlemania 37 – Fastlane.

NBC Universal now has the right to everything WWE, except live weekly episodes, which stayed with USA and FOX. If you’re in the US and want to watch Wrestlemania 37, you have to get yourself a Peacock TV subscription.

With that said, let’s proceed with fixing your problem with geo-restrictions. You’ll be able to stream WWE Wrestlemania anywhere in the world in no time.

Wrestlemania 37 Live – Smack Those Restrictions Down

Obviously, your geolocation dictates what you get to access or watch online, which is exactly what we’re going to alter, in a bit. First, let us introduce you to the tool that has the RAW talent to get the job done (See what I did there?).

It’s called a Virtual Private Network – a cybersecurity tool created to enhance your security by implementing military-grade encryption on whatever you send or receive. Once connected, your data will be unreadable to anyone trying to snoop around and harvest your data.

Another benefit of having a VPN is that it anonymizes your traffic by concealing your IP address. No, you won’t be IP-less; you’ll just take on a new, temporary one based on the location of the server you choose to connect to.

The moment you establish a connection and with the new IP address, you can access any service or website that’s restricted to that region regardless of your current location.

For example, if you connect to a UK server, you’ll receive a UK IP address. As a result, you’ll be able to access BT Sport and watch Wrestlemania no matter where you are.

The Showcase of the Immortals Live Anywhere – The Steps

Despite its ability to do a complex job, establishing a VPN connection couldn’t be any easier. Most of the providers on the market offer user-friendly apps, which target anyone regardless of their tech background. So, in order to watch Wrestlemania 37 on April 10 and 11, you should follow the steps below:

A VPN is the current it-factor when it comes to unblocking geo-restricted content. However, not every provider can get the job done as some are just there to harvest your information and sell it to third parties.

We’re referring to free VPNs that are definitely not safe to use – better avoid them at all cost. Providers like ExpressVPN, BulletVPN, Unlocator, and the likes guarantee premium services for a small fee.

Excellent speeds, top-level security, and impeccable unblocking capabilities are guaranteed. They also offer a 30-day refund policy in case you change your mind down the road, so there’s no risk in opting for them. Based on our thorough evaluation, these are the top 4 VPNs on the market today.

Smart DNS is the NXT (Pun-Intended) technology to unblock channels all over the world. However, while it does fulfill the same task, it does it with a different approach.

Unlike VPNs, Smart DNS only reroutes the parts in your traffic that showcase your actual location. No IP change is present in the process, which means that aside from unblocking content, you’ll have full access to your local channels as well.

Moreover, Smart DNS does not encrypt your data, meaning that you won’t be protected while browsing the web. That won’t be a problem if you’re visiting official websites and channels as they’re all safe.

This has its benefit, though. Without encryption, your speed won’t be affected at all, providing you with the high-quality WWE streaming we all crave, especially when it’s Wrestlemania.

Finally, Smart DNS is not limited to certain devices as VPNs are. It can be configured on devices where no VPN native clients are available. We’re talking about PlayStation, Xbox, Chromecast, Smart TVs, Apple TV, and the likes. To configure Smart DNS, follow the instructions below:

Unlocator is the only service that offers Smart DNS as a standalone subscription. This is pretty ideal for streamers who are not very interested in protecting their traffic. Moreover, the service has a 7-day free trial (No Credit Card Required), which gives you enough time to test it out.

The Show of Shows – Inside the Raymond James Stadium

Wrestlemania 37 will be big this year as, finally, we’re getting fans in the arena. The two-night event will take place on April 10 and April 11th, 2021, and there are a lot of matches to look forward to.

Bobby Lashley will defend his title against Drew McIntyre, and this fight is going to be epic. You see, Drew lost the title after having a tough battle at the Elimination Chamber, which none other than Roman Reigns was too cocky (Afraid) to go through).

Bobby knew what he was doing and attacked him after the match, allowing The Miz to cash in his Money in the Bank contract and win the title. Well, that’s a good strategy for the All-Mighty. Target the smaller fish for the title. Now, Drew is aiming to get his title back at Wrestlemania.

Another World Title fight will include a returning (Royal Rumble Winning) Edge as he faces both Bryan and Reigns for the championship. Bryan was later added to the match after submitting the Champ at Fastlane, but the referee didn’t see it.

We’re sorry to state this, but the championship matches pale in comparison next to the RETURN OF THE FIEND. Everyone’s excited to see this rivalry conclude at the Grandest Stage of them All and watch what The Fiend has in stores for Randy Orton.

There are a lot of matches to keep you on the edge of your seat, including the epic showdown between The Empress of Tomorrow and a debuting Rhea Ripley. Do you think Ripley is ready for Asuka? We’ll have to wait and see. Now, we gave you a glimpse of what to expect, but the fight card below should give you a broader idea.

Wrestlemania is coming your way on April 10 and 11, 2021, and it’s an event you don’t want to miss. A Virtual Private Network is all you need to get that dose of Sports Entertainment during the weekend.

All you have to do is select the right server and stream it live anywhere. With a VPN, they truly “CAN’T SEE YOU.” Now tell us, which match are you most excited to see? Is the rivalry between Kevin Owens and Sami Zayn as interesting as it was back in the day? Why is Logan Paul there? Drop us a line or two in the comment section below.