After a shocking defeat back in June, Anthony Joshua will look to reclaim his WBA, IBF, WBO, and IBO world titles on December 7th, 2019, in Saudi Arabia as he squares off against Andy Ruiz in an epic rematch. Tyson Fury predicted the results back then, but how will it turn out this time for the British boxer? There’s only one way to know that. Read on and find out how to watch Joshua vs. Ruiz II live online. 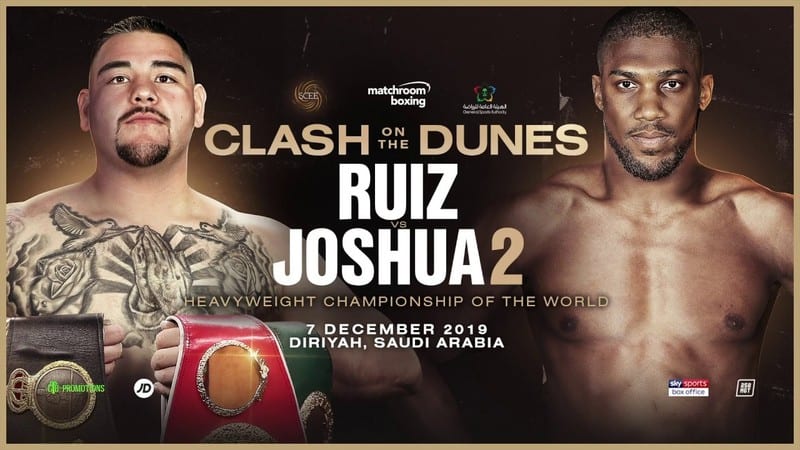 How to Watch Joshua vs. Ruiz 2 Live Online

Are you ready for an epic rematch on December 7th, 2019? Well, you should be. Here’s everything you need to know about the fight and how to stream it live online.

How to Stream AJ vs. Destroyer Live Anywhere in the World

A VPN can relocate you wherever you want to be by just connecting to a server in a specific location. If you want to appear in the US, just connect to an American server. The same goes for every country if you pick a server in the region, respectively. Once you connect, you’ll get an IP address in the territory, and direct access to everything restricted to that region.

Here’s how you can watch Joshua vs. Ruiz live anywhere:

If you want to access all the channels that are broadcasting the fight, ExpressVPN is the tool to use. It has servers in all the countries we’ve mentioned, and they’re blazing fast as well. Check out the VPNs that can help you with your problem in the table below.

Watch Joshua vs. Ruiz Live in the US

In the US, you’ll be able to stream the fight live on DAZN. The Netflix of sports has been the home for boxing events for quite some time now and never fell short in content.

They even cut a multi-million dollar deal with boxer Canelo Alvarez as he’s a DAZN exclusive fighter from now on. The best thing about DAZN’s service is that it doesn’t cost much on a monthly basis. Not only that, but all the boxing fights come within the subscription, no purchase what so ever.

If you want to watch Joshua vs. Ruiz live, all you have to do is get a DAZN subscription. You’ll be able to benefit from their 30-day free trial, and then you’ll have to pay a 9.99$ monthly fee. This is amazing compared to what other channels offer.

Moreover, the channel doesn’t kid around when we talk about supported devices. With a valid subscription, you can watch Anthony Joshua vs. Andy Ruiz live on Apple TV, FireStick, Android TV, Xbox One, PS4, Chromecast, iOS, Android, and Smart TVs.

Stream AJ vs. Destroyer in the UK

Sky Go is the most popular streaming service in the UK. This is because it has a plethora of programs that cater to any individuals streaming needs. If you’re a boxing fan living inside the United Kingdom, Sky Sports Box Office is where you need to go. If you have a cable subscription, you’ll be able to join in on what goes down in the ring without any problem.

The price of the fight might be £19.95 with an additional £5 fee for telephone bookings. This was exactly the price when I purchased Joshua vs. Povetkin.

Sky Go is an online streaming service that allows you to watch Sky when you’re not in front of your TV. That means that you can stream the fight on PC, Mac, Android, iOS, Xbox, PlayStation, Apple TV, Now TV, and Roku.

How to Watch Joshua vs. Ruiz Live in Australia

The fight is available for purchase on Main Event. It will most probably cost 49.95$, just like any other boxing fight. Australia has never disappointed its residents when it comes to hosting the best boxing matches on TV. Fans have always had a home to go to if they’re willing to stream major boxing fights online. 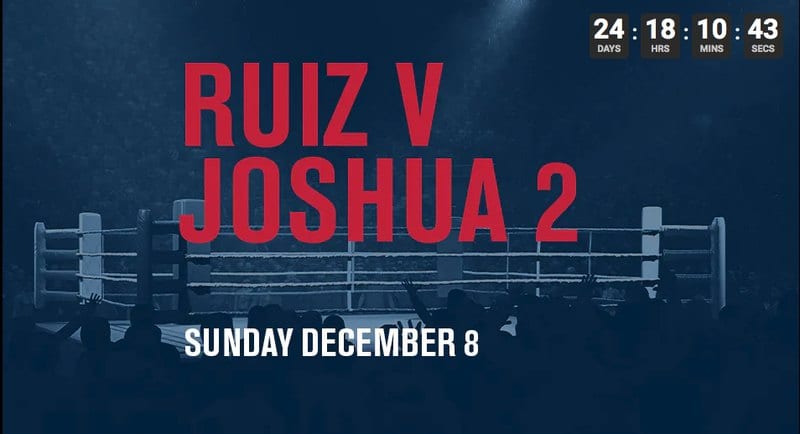 As I mentioned, you just pay for the PPV and stream live via Foxtel or Optus TV featuring Foxtel on your PlayStation, Android, Chromecast iOS, PC, Mac, Xbox, or Samsung Smart TV.

Canadians have none other than the Netflix of Sports, DAZN to broadcast such a huge title event. When you get a subscription to the channel, you’ll be able to stream live sports, including UEFA Champions League, MMA, Boxing, and much more.
Just pay $20/month or $150 annually, and you’ll have all the sports you need to satisfy your streaming needs. On the other hand, if you’re a new subscriber, you’ll be able to benefit from DAZN’s 30-day free trial.

Not to mention that the fight is part of the subscriptions, which means you don’t have to buy it as a PPV. So, go ahead, try DAZN’s services in Canada and enjoy the biggest boxing matches on your Apple TV, FireStick, Android TV, Xbox One, PS4, Chromecast, iOS, Android, and Smart TVs.

Back in June, Mexican fighter knocked Joshua down. The fight was called off in the seventh round. But that didn’t keep the British boxer down; he’s coming back for his titles as they both enter the ring for a rematch in Diriyah, Saudi Arabia.

Ruiz is pretty confident he’s going to upset the odds one more time. As a champion, I guess his confidence is going through the roof, although the arena is open-air. Here’s what he has to say:

“I’m confident about the rematch, but I don’t underestimate any fighter. I know AJ’s going to come stronger and more focused but inside the gym, like Mike Tyson says, everyone has a plan until they get hit.”

Some strong words from the Mexican fighter, don’t you think? But AJ did not just sit back without a reply. He also addressed the rematch:

“It’s about how you come back. I have a different challenge in my head. When you’ve walked the road once, you can do it again. I am looking at myself in the mirror and saying I know I’m better than that [losing last time round]. Andy is still the same person. He will come game and I’ve got to change some of my bits and bobs.”​

The previous fight generated more than £11,212,000 ($15 million) in UK pay-per-view sales. How much do you think this one will get? Not to mention that the highlight video on DAZN’s Youtube Channel is the most-watched in the platform’s history. We can’t make assumptions now, but we can take a look at how the two fights stand as of now: 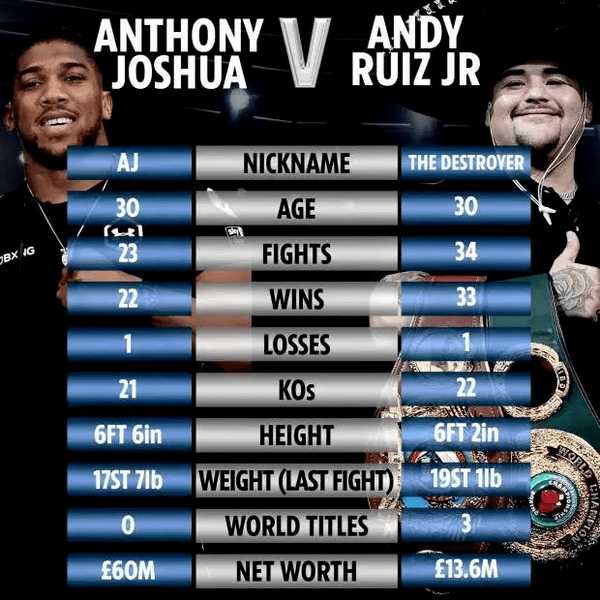 Below you’ll find the full card of the event that’s happening at Madison Square Garden:

How to Watch Joshua vs Ruiz Live Online – Final Thoughts

The fire between those two has been building up ever since their fight in June. This time, Joshua is looking to regain his titles after a humiliating finish. So, we’re guaranteed to get the best quality of boxing on December 7th, 2019.

For those who don’t know their way around and can’t seem to find a way to stream the fight, this guide is for you. Make use of the information I gave you and enjoy Joshua vs Ruiz II live anywhere. Now, tell me, who are you rooting for? Share your predictions in the comments below.