Can’t access BBC iPlayer with your VPN? Are you looking for a fix to watch BBC iPlayer while traveling abroad? British citizens love a good TV show and BBC certainly offers plenty of them. TV series like Top Gear, Peaky Blinders, Luther, Doctor Who, and EastEnders are just some of the top programs you get to stream on BBC iPlayer. There is one big problem though. If you’re a British expat currently living abroad, BBC is geo-blocked. 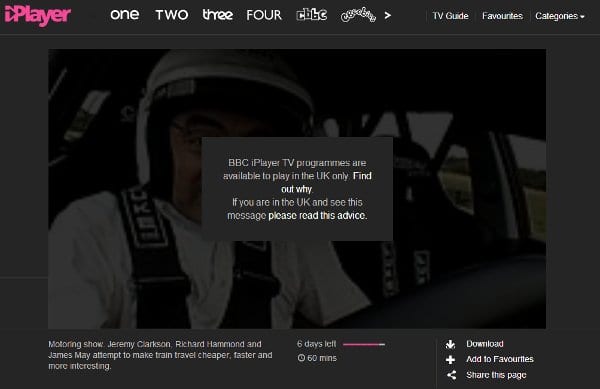 Trying to access BBC iPlayer from abroad would be like trying to fit a square peg in a round hole. In other words, it is impossible, unless you have a VPN or a Smart DNS proxy.

The streaming service is geo-blocked outside the United Kingdom due to copyright issues. So if you live in Australia, New Zealand, Canada, the USA or anywhere else, the following error messages will display on your screen.

How Does BBC Know I Am Using VPN?

You should note, however, that installing a VPN may not be the end of it. BBC iPlayer doesn’t like it when you play tricks, which is why it started banning VPN IP addresses. As a result, location error messages may still appear on your screen even if you use a VPN.

The ideal solution would be to switch to another server in the UK and try a new IP address. But if that doesn’t work, then I’m afraid you’ll have to subscribe to a new VPN service.

Don’t worry, you won’t have to waste your time searching for a new brand that may or not be compatible with BBC iPlayer. That’s because I compiled a list of the best VPNs for BBC iPlayer.

I think it’s fair to say that it’s best that you use top VPN providers to unblock BBC iPlayer, especially with the VPN blacklist thing. Therefore, you must never subscribe to unknown brands or free VPNs because you’ll soon realize that they are not efficient and can’t actually deliver what they promise.

After testing out several VPN services, I recommend that you use ExpressVPN because it is the best one when it comes to bypassing geo-restricted online content. This means that you can access BBC iPlayer from anywhere in the world, along with every other UK-restricted website.

Here’s a taste of what ExpressVPN provides:

So clearly, ExpressVPN is unmatched when it comes to features and benefits. Below, you can find a list of other premium services that I compared it with.

You can also use another method to unblock BBC iPlayer: Smart DNS proxy. This tool only targets the URLs that reveal your location and reroutes them, which means you’ll still be able to bypass geo-blocks and access BBC iPlayer. However, if you live outside the UK and want to use a Smart DNS proxy, there’s a couple of things you should know first:

If you still find the Smart DNS proxy way appealing, which many users do, I recommend you check out Unlocator. This provider has a big list of UK-supported channels, including BBC, ITV, Sky Go, and much more. It also gives clients the chance to test out the service with a 7-day trial period.

If you can’t access BBC iPlayer with your VPN, try to make the following changes before you take any drastic measures like subscribing to another service.

Have you ever experienced any difficulties when watching BBC iPlayer from abroad using one of the VPNs that were mentioned in the article? Let us know by leaving a comment below. In case you are aware of any VPN that doesn’t actually work with BBC iPlayer, also please share your experience.