How to unblock BritBox outside USA? BBC and ITV have teamed up and launched a new VOD streaming service called BritBox. At the moment, the new service is only available in the United States. Luckily, if you are a fan of British TV, you can bypass geographic restrictions and watch BritBox in UK, Canada, Australia, or anywhere else in the world. All you need is VPN. In this guide, I will show you how to use VPN in order to unblock BritBox on PC, Mac, iPhone, iPad, Android, Roku, Chromecast, or Apple TV. 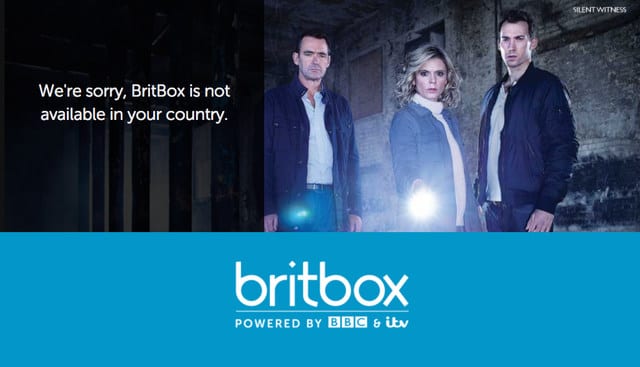 How to Watch BritBox outside USA

Is BritBox Available in CANADA, UK, Australia, or elsewhere outside USA?

According to the official website, Britbox is not available outside USA. There do not seem to be plans to expand to other territories either. So if you are a British TV fan, the only workaround to get BritBox in Canada, Australia, Ireland, or UK is to use VPN as explained below.

How to Watch BritBox outside US with VPN?

“We’re sorry, BritBox is not available in your country.”. That is the geolocation error you receive if you visit the BritBox website in Canada, Australia, UK, or anywhere else abroad. In essence, BritBox is able to determine where you currently are by looking at your IP address. That also means that you can trick the geo-restricted comedy channel to think you are in USA by hiding your IP. Here’s how it’s done using VPN.

Keep in mind that using VPN does not eliminate the need for a subscription to the channel you wish to unblock i.e. you still need to sign up with BritBox if you haven’t done so already. Anyway, here are the best VPNs you can use to unblock BriBox outside USA.

You can sign up for a free 7-day trial right now. A monthly subscription will cost $6.99. Britbox is very similar to streaming services such as Netflix, Hulu, and Amazon Prime. Its mainly focuses on British dramas, comedies, and documentaries. Acorn TV probably is the most similar channel to BritBox. The BritBox website is surprisingly easy to navigate around. Our first impression of the Android, Apple TV, as well as iOS apps are also positive. You can find a full list of all BritBox compatible devices below.

The last three TV series listed above will be available 24 hours after their UK broadcast.

How to Unblock BritBox outside USA with VPN?

There is no doubt that the new channel will become very popular among people who are into popular Brit soaps. If you live outside the United States, you can also watch BritBox by using VPN. Unlike BBC iPlayer however, the new online channel will not offer live streaming.