What is the best VPN for Fire Stick? The Amazon Fire TV is a great streaming device if you live in USA. Luckily, you can unblock and watch US channels on your Amazon Fire TV Stick abroad. (UK, Canada, Australia, Germany, France, Mexico, Spain). Learn how to bypass geographic restrictions and unlock geoblocked channels on Fire TV Stick by using Smart DNS or VPN in this guide. 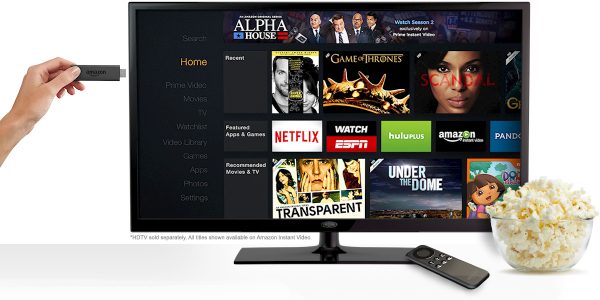 US-only channels like Netflix, Crackle, and Amazon Instant Video are not available on the Amazon Fire TV Stick outside US. To unblock and access these channels, you need to set up your Fire TV Stick with Smart DNS. A Smart DNS Proxy service conceals your true location from streaming devices like Fire TV Stick. Therefore, you can unlock and stream geoblocked channels on your streaming stick once you set it up. Smart DNS Proxies are very efficient when it comes to unblocking Netflix and the likes for a handful of reasons.

Try to find a Smart DNS Proxy service providing DNS codes that can unblock channels from different countries. Unlocator offer around 159 streaming services. Take a look at their guides and videos before signing up for a free one-week trial.

VPN is just as effective as Smart DNS in unblocking restricted streaming services. The way VPN works slightly differently and offers is own benefits however.

Watch US Channels on Amazon Fire TV Stick outside US – Miscellaneous

Many gadget experts have compared Amazon Fire TV Stick Google’s Chromecast. Any streaming device is only as good as the apps and channels it offers. That’s why it important to take full advantage of such streaming sticks by unblocking US channels on them. Here’s a list of channels you can unblock by using Smart DNS or VPN on Fire Stick.

Which American channels are you trying to get on your FireStick outside USA? Have you tried any of the workarounds listed above? Please do contact me if you need advise on how to use Smart DNS or VPN to unblock and watch US channels on Amazon Fire TV Stick.