In every industry, there are always two brands that gain an incredible amount of popularity on a global basis. More often than not, these brands also directly compete with each other. Think Pepsi VS Coca-Cola. In this article, I’m taking a look at the security feature of the mobile OS giants: iPhone VS Android. Read on to find out which OS takes the cake when it comes to its users’ security. 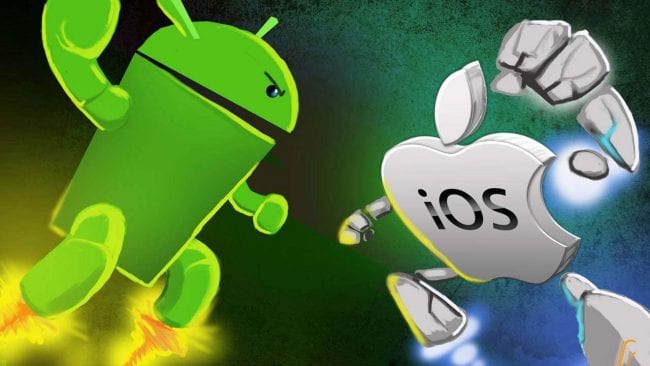 iPhone VS Android – Which Smartphone is More Secure?

Apple keeps its App store under a very tight watch. Every application needs to be vetted and signed off by Apple before it makes its way to their store. While this limits the number of apps iOS users can use, it allows Apple to decrease the amount of potential malicious applications. Additionally, Apple has made it mandatory for developers to release a privacy policy that clearly states how their app uses the data of iPhone owners.

With Android, it’s a little different. Google does vet the apps found on its play store. However, the sheer volume of apps increases the chances of malware and malicious code found. To add to this, Android users have the option of changing their settings to allow app downloads from outside of Google’s store. While this gives Android users a wider selection of apps to use, it also increases the risks of users downloading malware-infected apps. Apple doesn’t allow its users that option. This doesn’t mean that Apple users don’t run the risk of downloading malware-infected apps, just that the risk is drastically minimized.

Perhaps the main difference in the security of the OS used in Android and Apple is the availability of the OS code. Android’s code is mostly open-source, which means that any developer can use the code, tweak it, and come up with something new. This offers Android users a higher versatility when it comes to what their OS can do, but it does open them up to a lot of vulnerabilities.

It doesn’t mean that a tweaked OS has to be infected with malware. The real issue here is that a developer will not know what kind of a vulnerability their input on the code opened up without testing it out. Even simple changes that deal with the interface can open up a whole can-of-worms when it comes to vulnerabilities. There is good news for Android users though, Google offers up a significant bounty for any security researcher who finds a vulnerability in the OS. In a huge annual mobile security event in 2017, not a single bounty was collected because no security researcher was able to find Android hacks.

Apple, on the other hand, keep their code completely private. The only developers who can do anything to iOS are Apple’s own developers. What this means is that Apple users are less likely to be using untested code and that any vulnerability is swiftly dealt with on a mass scale.

Another major difference when you’re looking at the security of Apple product and Android devices is the hardware. Apple makes both the hardware and the software that your devices use. Simply put, you will not find any non-Apple hardware running iOS. Android, on the other hand, doesn’t really work like that. You can find many different brands using the Android OS, so Google only had control over the hardware that it produces, mainly Nexus and Pixel. Any kind of vulnerability that is primarily hardware-based has nothing to do with Google or their initial source code.

Those vulnerabilities, however, do effect Android users. You really need to trust in the hardware as much as you do the software, and Apple makes it easier to do that.

I’ll let you in on a little secret: If you keep your OS updated and promptly download any security update Android releases, you won’t have to worry about the security of your devices as often.

To be realistic, though, more people ignore their updates than the opposite. Apple does this great thing where it forces a user to update the OS. That’s why all Apple products are constantly up-to-date with any security issue. That’s also why it’s more difficult to hack into Apple products; the moment a vulnerability is discovered it gets fixed worldwide.

Android doesn’t work like that. Android users do get notified when a new update rolls out, but they’re not forced into it. There are still users to this day operating on Android Jellybean (Android 4.3) when the latest OS version is Android Oreo (Android 8.0). iPhone users are currently split between iOS 11 and iOS 12, but not for long. Soon enough, every Apple user will be running on iOS 12.

While not a “security” issue, per say, I still wanted to mention the privacy aspect of both Apple and Google because this should be something a lot of users think about.

Google is notorious for collecting all kinds of information from its users at all times. Literally. At. All. Times. A lot of the times, you won’t even know this is happening. Recently, the world found out that Google tracks your location even if you explicitly ask it not to. Another recent shocking privacy concern was that Google gives third-party apps access to your Gmail inbox.

Apple, on the other hand, actively works towards increasing their user’s privacy. This isn’t to say that Apple doesn’t log any of its user’s data, but it does aggregate them. In other words, the data that your iPhone collects is purely for Apple’s own products.  It cannot be traced back to any individual. Apple wants to see patterns of how its users interact with its product, it’s not interested in selling your data. Google…well…Google isn’t like that. Google doesn’t only focus on its own products, it’s a multi-faceted business conglomerate. So…it deals with your data the way any business conglomerate does. In fact, a recent academic research paper published by Professor Douglas Schmidt of Vanderbilt University aptly dubbed Google “the world’s biggest advertising agency”.

iPhone VS Android: The Verdict

If you’re looking for security and privacy, then iOS is definitely the OS you should be looking at. Still, Android’s security can easily rival that of iOS. Android users need to put in a little more effort to secure their devices. Always have an anti-malware app running on all of their devices. This will make sure that you don’t run the risk of infecting your device. If you want to download an app, stick to Google’s Play Store. Finally, always go to a trusted and certified retailer when you want to purchase any device, Android or otherwise. For added security on Android and iOS, consider using a trusted VPN provider to add another layer of security, privacy, and anonymity to your online presence.