Netflix has just been launched in the Middle East and North Africa. Arabic countries like UAE, Saudi Arabia, Egypt, Syria, Lebanon, Jordan, Morroco, Algeria, and Tunis can all access Netflix now. However, having checked the movies available in Netflix UAE, it is safe to say that the movie and TV series selection currently available to stream leaves a lot to be desired to say the least. Fortunately, there is a quick fix that allows you to change your Netflix region and unblock American Netflix in UAE. VPN and Smart DNS Proxy both offer a workaround that enables you to switch your Netflix country and access thousands of more movies on Netflix. 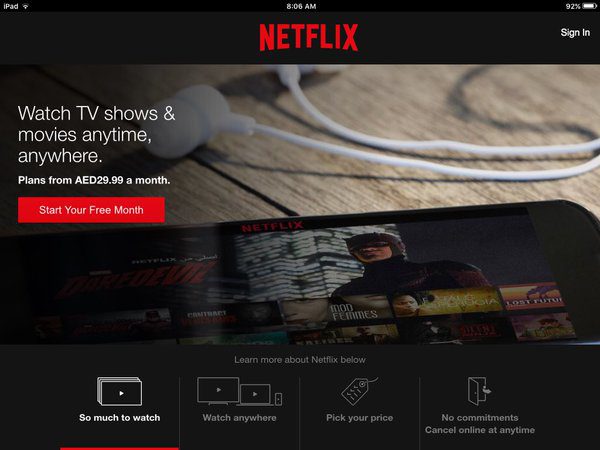 How to Watch American Netflix in UAE with VPN

Before Netflix launched in UAE, you’d get a message that stated that Netflix hasn’t come to this part of the world yet. Now when you visit the Netflix website, you can sign up for an Emirate Netflix account. The same account can be used to watch other Netflix regions including US, UK, Canada, Australia, or Spain. To switch your Netflix region to American, you need to spoof/hide your online location. You can do that using VPN. VPN enables you to unblock all Netflix regions.

To try VPN, sign up with ExpressVPN. ExpressVPN have VPN servers in 78 different countries including USA, Australia, Canada and the UK which means you can unblock all these Netflix regions. Below you can find my top three VPN providers to unblock American Netflix in UAE.

How to Unblock US Netflix in UAE using Smart DNS Proxy

Update: Unlocator no longer works with American Netflix. Use ExpressVPN to get Netflix USA in UAE instead.

Given that most ISPs in the Middle East, including Emirate, use transparent proxies, using VPN to change your Netflix region is probably more recommended. Given the fact Unlocator offer a free 7-day trial, you have nothing to lose if you wish to try unblocking American Netflix in UAE using Smart DNS.