Having an extra source of income, regardless of the amount, is what many people long for. Mix that with online gaming, and you got yourself the perfect side-job. Well, that actually exists in the form of MistPlay – a mobile application that allows its users to make money in return for playing games. However, such an excellent app is only available in select countries, leaving millions on the side. Well, not for long. Here’s everything you need to know about MistPlay and how you can download/install it on your device wherever you may be. 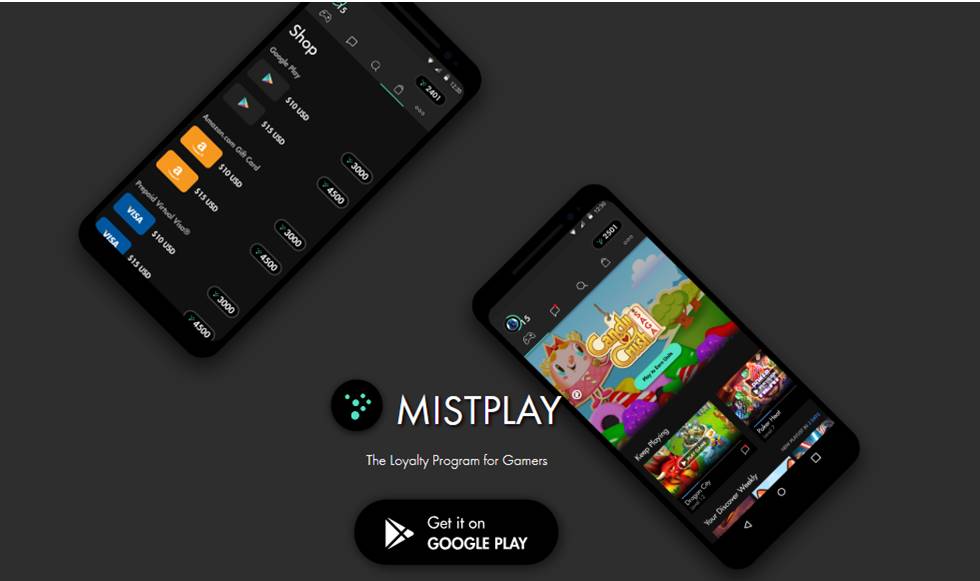 MistPlay – The Loyalty Program for Games

MistPlay launched back in 2017, offering Android users a platform for playing video games and earning credit while doing so. It markets itself as a “Loyalty Program Built for Gamers.” It now has more than 10 million downloads on Google Play Store.

The application costs nothing but helps its users gain a lot. The gamers on the platform earn rewards in the form of points, which allow them, later on, to exchange (redeem) them for gifts.

The process is quite simple – the longer they play, the more points they earn. At the launch of the app, users get asked to sign in with either their Google account or Facebook.

After that, they get to select the games they already have on their phone to check if they’re available on the platform or not. If it’s a “No,” MistPlay shows them games related to what they’ve chosen.

Moreover, MistPlay users get to choose games from its library, browse for offers, and finally, get rewards by fulfilling various tasks while playing the selected games. The rewards come in the form of the following:

PXP enables gamers to earn more GXP, and GXP allows them to earn more units. It might seem confusing, but it’s actually a full cycle, which everyone can get used to once they get the hang of MistPlay.

Referring friends will also get gamers 100 Units/person – a good headstart. Now, the app is very beneficial and fun at the same time, but as we mentioned, it’s only available on Android. Don’t just stop there. Scroll down – there’s more.

As we mentioned, MistPlay had grown a lot ever since its official launch back in 2017. The users that MistPlay has are in the “millions,” but the regions it covers don’t exceed 15.

Unfortunately, it appears that MistPlay is only available in select countries. So far, users who get to download and use MistPlay should be residing in the following countries:

The company seems to be focused on expanding its services to reach other regions as well. It makes sense, actually, as the company’s main aim is to get gamers’ feedback. In other words, the more supported regions, the more feedback it gets. According to MistPlay:

“We’re always working hard to expand to more countries, and we appreciate the interest we’ve been getting from aspiring players worldwide.”

MistPlay proved that it’s here to make an impact, and it definitely is. According to Globe and Mail’s 2020 ranking of Canada’s Top Growing Companies, the company ranked has ranked 4th among other Canadian companies, with a growth of 7,578% on three-year revenue growth.

The countries mentioned above are the only ones where users get to download and install MistPlay on their devices. In other words, no one can find the app on Google Play Store if they live outside the supported areas.

If you search for the app itself inside Google Play, you’ll notice that it’s nowhere to be found. However, if you look for it using a search engine, it’ll appear, and the link will redirect you to Play Store, where the app instantly shows up.

Nonetheless, this doesn’t mean that you get to download it. The first thing you’ll witness is a message in red, restricting you from downloading the app:

“This item is not available in your country.”

Now, this won’t stop you here as there are a couple of ways to get the app in your country with complete ease. You’ll be joining the 10M+ who downloaded MistPlay in no time once you’re done with the following:

The first method to get MistPlay is to alter your Google Play Store’s region to one of the countries where the app is available. We’ve already provided you with the list of regions above. All you have to do is pick one and follow these steps:

As mentioned, signing up for a VPN is very crucial when it comes to operating the app itself, but we’ll get to that later on. With the steps above, you can easily download and install MistPlay on your Android device.

This method does not require a VPN to complete. In fact, all you have to do is download an APK file and install the application straight on your device.

Please remember that you have to pick a reliable source for APKs. No one knows who might be hosting the website and what kind of malware they’ve infected the APKs with. We’ll be adding a reputable APK in the steps; you’ll be fine.

We don’t always recommend using APKs because, as we mentioned, it can be dangerous if it’s download from an unreliable source. Hackers are always on the look to prey on victims that don’t know their way around the internet, so be always cautious.

Despite getting the app on your Android, the problem will proceed since MistPlay applies geo-blocking. This mechanism is used by dozens of applications as they restrict user access based on his/her location.

Once you launch the app, it will examine your IP address to determine where you physically reside. If it’s not in one of the supported countries, error messages will start to pop up. So far, we encountered two of those:

Bypassing geo-restrictions is what we do best, and the top tool to do so is a Virtual Private Network. A VPN reroutes your traffic through a server in a country of your choosing. Once connected, the VPN encrypts your data and conceals your IP address, replacing it with a temporary one valid in the region.

For example, if you connect to a Canadian server, you get a Canadian IP address, granting you access to content only accessible in that region. It’s that simple, and we’ll show you how to do so later on.

Now, remember when we mentioned that a reputable VPN is recommended. Yeah, that’s due to the fact that MistPlay applies tough VPN blockings, banning providers that deem not credible enough to unblock the app.

Apparently, MistPlay doesn’t tolerate VPN use, and they weren’t shy to go public with it. Here’s what their official website states:

Please note that MISTPLAY is not currently available in all regions. If you are connecting from a region where MISTPLAY is not available, we ask you to refrain from using a VPN to access the app.

We tried a random “Free” VPN to see how it performs when it comes to unblocking the service in an unsupported country. The results were as expected – we couldn’t get in. MistPlay determined that the traffic was that of a VPN and blocked our access instantly: 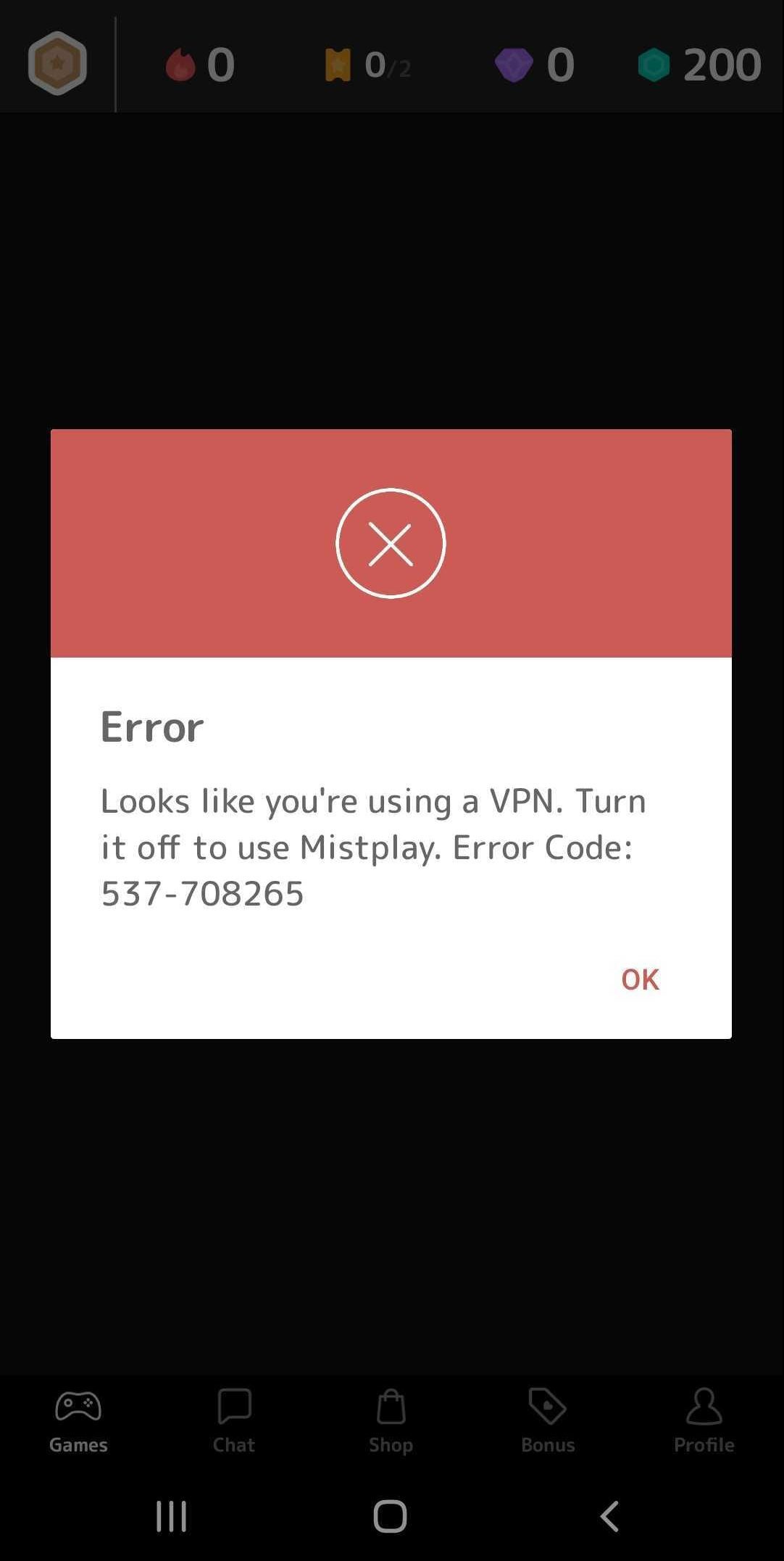 You now have an idea of what a free VPN cannot do, and it doesn’t stop here. Aside from offering poor services, free VPNs can be quite dangerous, especially when it comes to your privacy.

The providers don’t have a main source of income, so they turn to your personal information. They sell it to sister companies and other third-party advertisers despite claiming to have a no-logging policy. So, stay away from those, shell out a few pennies, and make sure that your private information remains out of anyone’s hands.

As we learned in this guide, MistPlay has a lot of defense mechanisms, specifically in regions where the app is not available. But now that we’ve covered everything and crossed the idea of using a free VPN, let us show you how you can unblock MistPlay anywhere:

If you didn’t sign up for a premium VPN, now is the time. As mentioned, ExpressVPN is always recommended.

With ExpressVPN, you get servers in over 94 countries to choose from. In other words, you won’t be running out of options with this provider. The most important thing about ExpressVPN in this scenario is the speed performance.

ExpressVPN offers blazing-fast speeds, which is ideal considering you’ll have to be connected while playing your games. Any kind of lag can affect your experience and earnings.

The service does have a 30-day refund policy in case it didn’t live up to your expectations, which is also why we thoroughly tested other VPNs that can get the job done with ease. You can check them out in the table below.

One might ask: Why would an app be free yet offer so many rewards? MistPlay is basically a game-testing website for game developers, which helps them improve everything they’re offering.

With the gamer’s feedback, those developers can identify any glitch that needs to be fixed. So, technically, you’re paying your dues. Now, everyone will get the chance to try this amazing app no matter where there are.

All you have to do is follow the steps above and get MistPlay on your Android device. If you need any help with the installation process, please drop us a line or two in the comment section below.