On December 13th, 2019, the Alexandra Palace will host the biggest Christmas party of the year as Michael van Gerwen defends his PDC title against 95 other competitors. The 2020 PDC World Championship is on its way, and the winner will be decided on January 1st, 2020. The biggest event in darts is fast approaching. Wherever you may be, here’s how you can watch the 27th William Hill World Darts Championship live online. 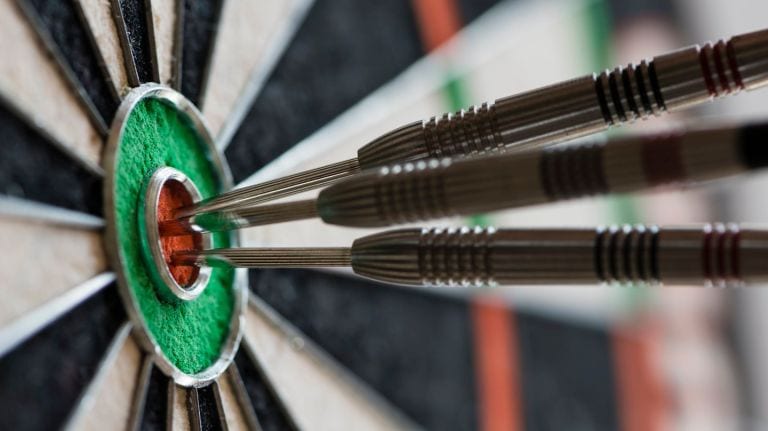 Last year, the tournament had a long list of official broadcasters. However, this time around, some changes were made. You now fewer ways to stream the PDC World Championship locally and internationally.

But you need to know whether it’s local or global, restrictions do apply based on your geographical location. But the question is, how can a streaming service determine where you actually are? Easy, by examining your IP address.

That’s not all it can figure out, a website/service can know what browser you’re using, what device you’re operating on, and your Internet Service Provider as well.

Geo-restrictions can pose as an issue for frequent streamers and online users. However, we’re going to solve the problem later on in the article. As for now, here are the 2020 William Hill World Darts Championship’s official broadcasters:

PDC TV is a new streaming service dedicated to everything the Professional Darts Corporation has to offer in terms of competitions and world championships.

The best thing about this channel is that it is global and it has a free option where you get to see highlights and some featured videos from the archives. However, if you have a free account, you won’t be able to access live-streaming.

When I say that it’s global, I should exclude the likes of the UK as the channel is blacked out due to the fact the Sky Sports has the distribution rights there.

If you encounter this error message, it means that your territory is not supported by the channel:

“We’re sorry, this content is only available in certain countries.”

PDC TV is an excellent way to stream your content as it’s very cheap and easy to operate. You have four ways to subscribe to the channel. However, each subscription comes with specific content you can tap into. As I mentioned, if you create a free account, you won’t be able to use its live-streaming feature.

Take a look at the subscription plans below and pick one that suits you best. 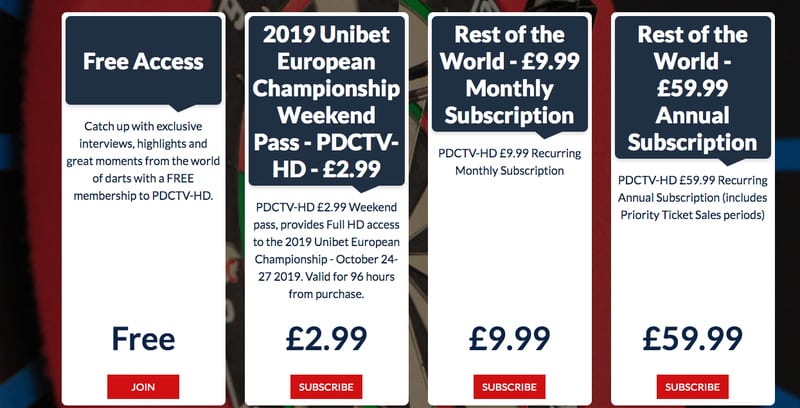 With that covered, let’s head over to the part where I show you how to unblock each and every one of the channels on our list no matter where you reside on the map.

As I mentioned, streaming services rely on your IP address to determine your location. So, the best way to access a blocked channel is to trick it into thinking that you’re within its area of coverage.

Luckily, an internet tool with that capability exists and it comes in the form of a Virtual Private Network. Short for VPN, this cybersecurity software was designed to protect your data and hide your identity as you browse the web.

Once you connect to a server, the VPN encrypts all your traffic, cloaks your IP address, and assigns you a new one based on the server’s location. If the server is in the United Kingdom, for example, you’ll obtain a UK IP address.

As a result, you’ll appear to be browsing the web from the UK and have direct access to whatever is online-restricted in the territory, including the likes of Sky Sports.

Here’s exactly what you need to do if you want to stream the 2020 William Hill World Darts Championship in an unsupported region:

You’re probably wondering why I suggested ExpressVPN above. According to my personal experience, this VPN is perfect for HD streaming. You don’t want any glitches or buffering issues occurring while watching the tournament, do you now?

Aside from that, ExpressVPN boasts more than 3000 servers in 94 countries, which is more than enough to get whatever streaming service you set your eyes on. Finally, the provider has a 30-day refund policy, which means you can get your money back within 30 days of purchase if it doesn’t live up to your expectations.

In case ExpressVPN is not what you’re looking for, there are several other top providers out there that can do that task just as good. Check them out in the table below.

This year’s total prize is pretty good actually. Let me show you how the £2,500,000 is distributed among the participants in the 2020 PDC World Championship:

As for the full schedule, you can find it below with all the matches included. The tournament starts on December 13th, 2019 and rounds up on January 1st, 2020. In other words, you’ll be ending this year and starting a new one with some epic Dart Action.

Online streaming can be pretty daunting with the presence of geographical restrictions. If you live in a country where no broadcaster is available, watching your favorite player hit the bullseye is the least of your concern.

However, that’s the main reason I came up with this guide, to help you out with your issue. Just use a VPN and your problem is solved. By the way, tell me who you’re cheering for and what do you expect in the tournament in the comments below.

And now, since you know how to watch the PDC World Championship live wherever you are, I’m dying to say this, so excuse me. Ladies and gentlemen: Ready, Set, Dart!!!