When it comes to VPNs, internet users always like to protect their online data more but pay way less. As is the case every year, many VPN service providers have launched some intriguing Black Friday Deals. While some of these discounts might seem extremely cheap, they might not be the best in terms of value for your buck. As Black Friday is drawing ever closer, we take a look at some great VPN deals for 2019. 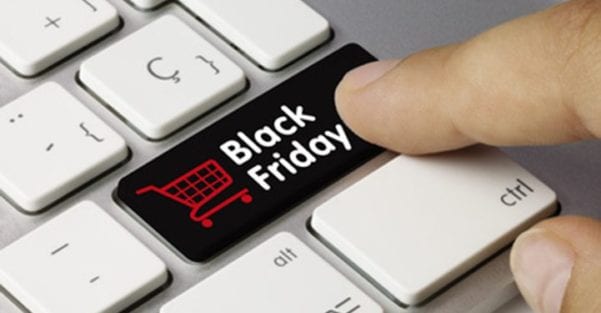 The Best and Cheapest VPN Black Friday Deals of 2019

The Best and Cheapest VPN Black Friday Deals of 2019

Pricing is a crucial thing to consider before purchasing any merchandise. That includes Virtual Private Networks. Most internet users get tempted to sign up for free VPNs just because, well, they’re free.

But what they don’t know is that these services aren’t really free. If you’re saving up on some pennies, rest assured you’re paying in other ways, your private information.

Every year, premium VPNs (most of them highly reviewed on TrustPilot) come up with the best deals during the Black Friday season. This year is no different, and I’ve compiled a list of the best VPN deals you’ll see come 2019 Black Friday.

ExpressVPN is one of the top VPNs in the industry today. It has more than 3000+ servers across 94 countries.

With this kind of service, you’ll expect such a VPN to be a bit expensive. Well, technically, it is. However, at the end of the day, you’ll be getting what you pay for.

So, basically, ExpressVPN is offering 49% off its subscription. This drops the cost to $6.67 per month. Users also benefit from three months free with this offer.

To be honest, there’s nothing special about ExpressVPN’s deal when it comes to Black Friday. I mean, you can get that offer now without having to wait. But hey, you never know when ExpressVPN revokes this offer. So, if you’re looking for some quality VPN, better hurry up and get the offer as it still stands.

IPVanish claims that it’s the fastest VPN out there. According to reviews, they don’t just talk the talk; they actually do walk the walk.

The VPN comes with pretty fast servers across 60+ countries. They had their ups and downs in the past when data breaches were discovered, but as of now, it’s considered to be one of the best VPNs in the world.

As for Black Friday, the service offers an intriguing deal for new and old customers. You’ll end up getting a 73% discount on your annual plan, which rounds up costing you only $3.25/month.

In my opinion, that’s a pretty good deal considering IPVanish isn’t the cheapest VPN out there. So, in case you like what they have to offer, hurry up and subscribe, you get a 7-day money-back guarantee.

NordVPN has the biggest server network in the VPN industry. It boasts more than 5000 servers across 60+ countries. That is a pretty good number if you wish to unblock streaming services and websites from all over the world.

However, NordVPN also excels in the security department, offering unique features such as a kill switch, CyberSec, Double VPN, and a strict no-logging policy.

As for its deal for Black Friday, NordVPN is offering a good one. You’ll be getting an outstanding 83% discount if you opt for the 3-year deal. That brings your monthly payment down to $3.49/month. Oh, also, you’ll benefit from three extra free months.

If you do the math, it’s actually 70$, but the deal is not done yet. NordVPN is adding its famous NordLocker file encryption feature for free.

The service itself is worth $312. So, getting it for free is a very good thing. It uses the best security available such as Argon2, AES256, ECC (with XChaCha20, EdDSA, and Poly1305),  and other creations of modern cryptography to guarantee ultimate security of your files.

With this service, you get to secure your files and share them without fearing any possible hacking attempts.

NordVPN has a 30-day money-back guarantee in case you want to give their service a test drive. If you did not like what you’re using, you could ask for a full refund within 30 days of purchase, no questions asked.

SurfShark took the VPN world by storm the day it launched. It’s very new, but you really have no idea what this provider is capable of.

First, it has more than 800 servers in 60+ countries, which is an excellent number for a newcomer. Second, how many VPNs can say that they can unblock American Netflix? Well, this new kid on the block can get it along with other services such as Hulu, DAZN, and HBO Now.

Moreover, SurfShark allows you to connect an unlimited number of devices using the same account. So, in other words, the new cybersecurity tool offers something none of the giants provide – unlimited simultaneous connections.

So, SurfShark is kicking it up a notch with a 2-year plan subscription deal. With that, you’ll pay $1.99 a month, and you will get three extra months for free. On their website, they reflected the deal in an awesome way. Check it out. 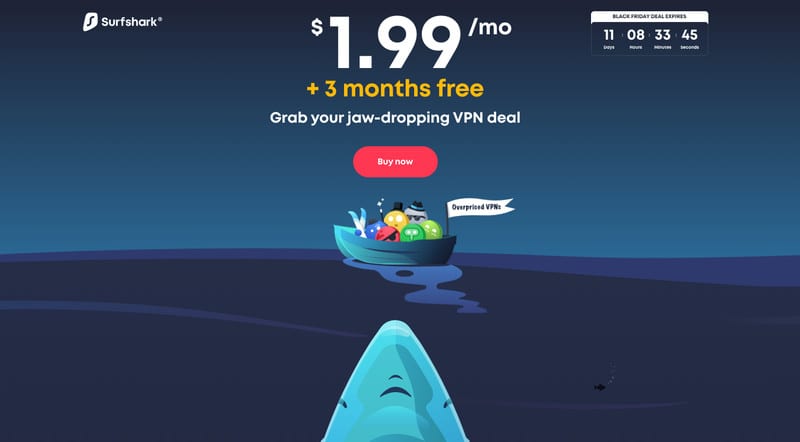 Last year, SurfShark was absent from the list of deals. To be honest, I’m quite surprised to see it engage this year as their subscription plan is already cheap to begin with.

But hey, the more, the merrier, no? Or in this case, the less, the merrier. You’ll also have a 30-day refund period if you want to test their service.

CyberGhost is another top VPN provider with a huge server network of 5700 servers in 90+ countries. The service provides blazing fast speeds and unlimited bandwidth along with top security features that guarantee you the safest internet browsing.

If you’re looking for safe torrenting experience, free from data logging, and unlimited streaming options, you can join this provider’s big fan base now.

Cyberghost is also one of those VPNs able to unblock Netflix anywhere despite its VPN blocking mechanism. Once you subscribe to the service, you’ll be able to use your account on seven devices at once.

Now let’s talk about the deal CyberGhost is offering for the upcoming Black Friday. The provider is offering a 79% discount on a 3-year subscription plan. This is equivalent to $2.75 a month.

In case you’re wondering about the efficiency of CyberGhost, the provider allows you to get a refund in case a hitch comes up in the road. You can ask for your money back within 45 days of purchase.

VyprVPN has been around for quite some time now. It has amassed a total of 2 million+ users around the world. That’s mainly due to the features it offers, including the well-known Chameleon protocol.

You’re all familiar with the OpenVPN 256-bit protocol. Well, Chameleon uses the unmodified version of that protocol as it scrambles the metadata packets to ensure that it is not recognizable even via deep packet inspection. In other words, VyprVPN took privacy to a whole new level.

VyprVPN is based in Switzerland and has a server network of 700 servers in 70+ countries. With these servers, along with the Chameleon technology, VyprVPN can circumvent the VPN block that Netflix imposes.

On the other hand, the provider allows you to connect a certain number of devices depending on the plan you choose. If it’s the regular one, you get three, but when you opt to its premium deal, you get five concurrent connections. 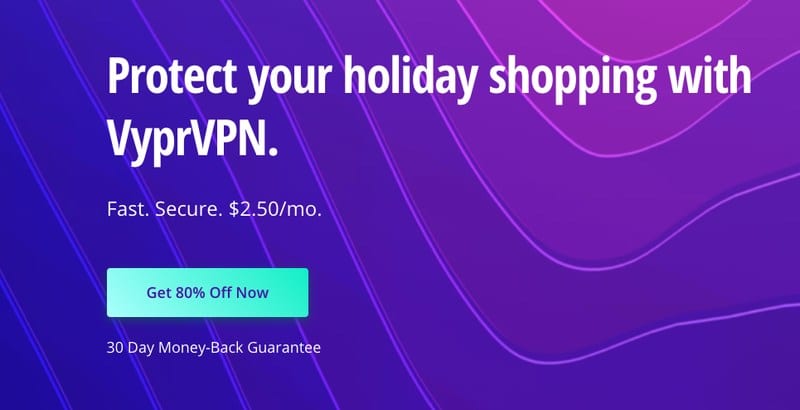 In my opinion, VyprVPN offers some great deals. You can also take its service for a test drive risk-free courtesy of their 30-day money-back guarantee.

What you read above is enough to give you all the info you need about the upcoming deals each and every VPN has in stores for you during the upcoming Black Friday.

I might not have mentioned what all the top premium VPNs are offering, but below, you’ll find the missing ones in a more comprehensive look along with the aforementioned providers. Check them out:

It’s Black Friday season everybody and VPNs are topping the charts with amazing deals. Online security and privacy need to be cheaper for every internet user out there, and now it is.

Check out the deals I’ve listed above, and pick the best VPN that suits your needs. If there’s any question you need to ask, drop in the comments below.