A channel that is dedicated to sports you say? Do you want to keep up with the latest sporting events around the world? Well, ESPN got you covered, umm provided you’re in the US. Don’t dwell, dear streamers. There is always hope if a VPN or Smart DNS are involved. Let’s see how you can watch ESPN anywhere in the world.

How to unblock and watch WatchESPN outside the USA

ESPN is great. It’s the perfect approach to all avid sports fans to enjoy a tremendous amount of sports content. However, ESPN isn’t for everybody. It’s only available to the eyes of those who reside in the United States. Well, we’re not here to state that. Every restriction has a loophole and in this case, it comes in the form of a VPN and Smart DNS. Check out how to unblock ESPN abroad in this guide.

ESPN Outside the USA – VPN to the Rescue

ESPN prevents you from accessing its online streaming services if it detects that your IP address is not American. If you’re an American who’s leaving the country, you’ll notice that your IP changes as soon as you connect to a network abroad. Now, if you try to access ESPN with the new IP address intact, you’ll receive the following error message:

“This content cannot be accessed outside of the US.” 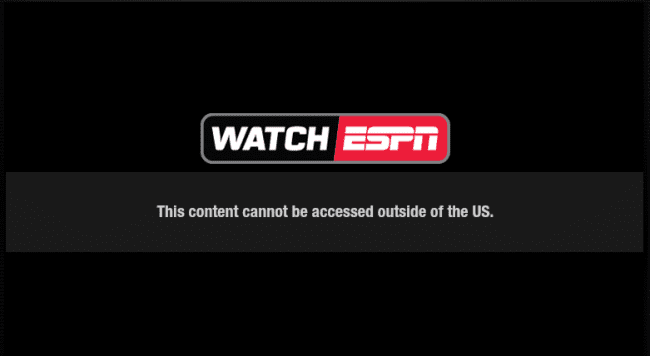 But wait, a VPN allows you to alter your location by changing your IP address into one based in the US. Once you set up a VPN, choose an American VPN server. That’s all there is to it. A VPN has a lot more to offer. With a push of a button you can:

Watch ESPN Outside the US with a VPN

Setting up VPN on devices with VPN clients is relatively easy. However, the same cannot be said about streaming devices which are not VPN ready. For example, Apple TV, Chromecast, and Roku don’t have VPN clients.

You need to install VPN on a VPN compatible router instead if you wish to stream ESPN and the likes on such devices. I’m going to give you an easy step by step process to unblock ESPN abroad. Scroll a bit more and find out.

Now, it’s time to ask yourself, what VPN to choose? Well, I already gave you an idea about what I use. Other top VPNs for ESPN are presented below in a full analysis. Check them out and pick one according to what your needs are.

Whatever search engine you choose, whether it’s Google, Duck Duck Go, or Yahoo, you will come across VPN service. However, I don’t recommend using one at all as they’re well-known to be unreliable when it comes to your privacy. On the other hand, there are top VPNs for ESPN out there and I’m going to list them below. Check them out.

ExpressVPN is one of the few VPN providers that offer a huge server network that covers more than 160 locations. If you’re a sports nut out there, you’ll have no problem accessing ESPN as ExpressVPN has blazing fast servers in the United States.

The application they provide is very easy to use. It’s simple and effective, as well as glitch-free. You’ll be able to switch between servers with a push of a button. Oh, and you get unlimited server switching and bandwidth.

As for security, this VPN automatically uses OpenVPN as its main tunneling protocol and pairs it with AES 256-bit encryption. This enables the best anonymous web browsing experience. Moreover, you also get Smart DNS for further unblocking tasks, that’s if you don’t rely on security much.

NordVPN can unblock ESPN with ease. I’ve tested the VPN provider and came back with amazing results. Not only does ESPN work perfectly, but I was able to access US Netflix, Hulu, BBC iPlayer, and Amazon Prime Video.

On the other hand, when it comes to speed, the service is a bit slower than ExpressVPN. However, it’s still fast enough to stream without buffering issues. Now, if we’re comparing services, let’s talk about 2 of its exclusive features. The first one would be Double VPN, which enhances your security and privacy in a great way. You’ll be rerouting your traffic through two VPN servers instead of one. I’ll leave the security calculation to you now.

Nord VPN offers more than 5000 servers in 62 countries. Not to mention that you’ll be able to connect 6 devices at once using one account. That’s more than plenty of other VPNs provide.

BulletVPN is always judged for having a small network of servers. However, have you asked yourself what else it offers? I mean 154 servers in 55 countries with the most demanded channels. It’s also one of the few VPNs that actually unblock American Netflix. Wherever you are, even if you’re located in highly censored countries, this VPN will help you out.

It employs strong encryption protocols and abides by a strict zero-logging policy. What else can an internet user who cherishes his privacy ask for? Six simultaneous connections? Yeah, they have that too along with an outstanding customer support service.

SurfShark is considered to be the new kid on the block. Be careful, being new doesn’t mean that it can’t rival with the giants. The service comes from the British Virgin Islands, which means you don’t have to worry about retention laws what so ever. You’ll find a decent server list of 800 in 50+ countries, including fast ones in the US.

What makes this VPN stand out is that it offers unlimited simultaneous connections. I mean like everyone you know can benefit from a VPN connection while using a single account. Not only that, but it also has a kill switch and DNS leak protection along with AES-256-GCM encryption.

You know what, a VPN isn’t the only tool to unblock ESPN and other geo-restricted channels. You can also use Smart DNS Proxies.

This technology doesn’t tamper with your IP address at all. It only redirects part of your traffic that gives away your actual location. Once you alter your DNS settings using this service, you’ll be able to watch whatever the provider you’re using supports.

Although the security is missing, you can benefit a lot from using Smart DNS. Shall we take a look?

I suggest you use Unlocator as it’s able to unblock 232+ channels. More and more services are added on a daily basis. Try them out for free. All you need to do is subscribe to their free 7-day trial and you’re good to go. In case you need any help, follow their setup guides and you’ll be fine.

WatchESPN outside the US – Unblock via Smart DNS or VPN

If you own or are able to get a valid American cable subscription, then using Smart DNS or VPN to unblock ESPN abroad becomes well worth it. You can always post a comment in case you need more info about either Smart DNS or VPN.