Ever tried searching for a show on Netflix but to no avail? Let’s be honest you guys, just like you Norwegian streamers, I don’t feel that I’m getting my money’s worth out of my Netflix subscription courtesy of geo-restrictions. The real “Cave of Wonders” lies in the US catalog. Luckily, I found a way to circumvent this issue and access American Netflix in Norway. Want to find out how to do so? Follow my lead.

How to Watch American Netflix in Norway

Outside the US? Enter a Different Catalog

Don’t you just hate it when you end up watching some B show while US residents enjoy the full capacity of Netflix’s library? Yeah, it’s quite frustrating.

A while ago, I was in the mood to watch some good alien romance. When I searched for Star-Crossed, it showed the name but not the actual streamable title. Apparently, the show is only available in the US. You can imagine how my night went afterward.

I’m sorry Netflix, but we don’t want to be stuck with original shows, even those can be missing from our region’s catalog due to copyright agreements. We want to stream Star-Crossed in our country as well.

The problem here lies in the distribution process. Every country around the world has its own region-selected content on the streaming giant. There’s a huge difference between the content’s number. The more we can get, the merrier, no?

Don’t worry, when you’re done with this article, you’ll be sitting back at home in Norway and watching the full Netflix catalog in no time.

If you happen to be an American resident and decided to travel abroad, you’ll lose access to your regional account. In other words, No matter where you are, your Netflix login will gain entry to the local catalog of Netflix.

If you’re in the UK, you get the UK version of the service. The same goes for Norway. If you happened to download a video while still in the US, then tried to watch it overseas, you’ll get a geo-error message that instantly blocks your viewing.

“This title is not available in your current region.” 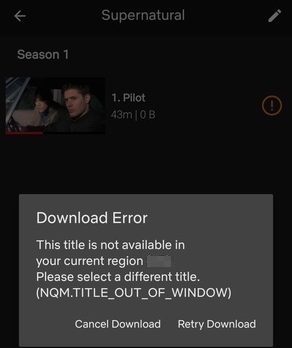 As we mentioned, a VPN is the perfect way to unblock Netflix US in Norway. However, you must make sure the VPN works with the streaming giant as Netflix is able to block VPNs nowadays.

Forget about free VPNs, they’re a helpless case. Even premium VPNs such as IPVanish have fallen victim to this ban. If Netflix detects that you’re using a certain unblocker, you’ll be informed immediately.

I personally can’t blame the channel for taking such drastic actions. It’s simply keeping in line with the commitments with content licensing agreements.

But as I told you before, I’m going to help you out. You will watch US Netflix in Norway no matter what. Scroll a bit further to the south and find out how to do so.

How to Watch American Netflix in Norway with VPN

A Virtual Private Network is an internet software that alters your online location and makes it appear as if you’re accessing websites from a different country.

That only depends on the server you connect to. If the VPN server is based in the US, your traffic will seem to become from that territory, thus, you’ll have full access to what the US has to offer when it comes to online content, including US Netflix. Also:

Whatever you choose, you should make sure the VPN your settle for can actually unblock Netflix. Luckily, such credible providers exist, take ExpressVPN for instance. This VPN is considered to be the best VPN to unblock US Netflix. It offers fast connections, top-notch privacy protections, and comprehensive customer support in case you run into trouble setting it up. However, it’s not the only one on the market to keep a keen eye for. Check other best VPNs for Netflix in the following table.

How to Unblock American Netflix in Norway – Step By Step Guide

In order to access Netflix’s US catalog, you need to be seen as if you’re accessing its website or application from the US. That’s simple when you’re operating with a VPN.

Just connect to a US server. This will give you a temporary American IP address and a direct ticket to Netflix’s US library in seconds. I’m going to give you a more comprehensive look at the matter, don’t worry.

So, shall we get down to business?

Told you I have your back. Now you can watch US Netflix in Norway, which means everything that Netflix has to offer is at your disposal now.

Netflix US in Norway – What to Watch

If you don’t have an idea about what to watch on the streaming giant once you get your hands on its full library, I’m here to help you out as well. You see, Netflix boasts a huge number of amazing shows, including its Netflix Originals. You’ll find hundreds of titles worth Binge-watching on a Saturday night. Therefore, let’s take a look at what you can start with:

A streaming giant like Netflix won’t just be available on a device or two. You can literally stream the most amazing content on dozens of platforms including:

How to Get American Netflix in Norway?

The difference in content between the American Netflix library and Norwegian Netflix is huge. Therefore, it isn’t really a surprise that so many of us – avid streamers would want to get a hold of American Netflix. That’s not a problem anymore with the help of a VPN. As I suggested, try ExpressVPN and let me know how your experience was in the comment section below.