We’ve all heard of the term “P2P File Sharing” before, but for those of us who haven’t been around the torrenting community for long or aren’t digital natives, P2P sharing can get a little confusing. In this guide, I’m going to be walking you through P2P File Sharing as simply as possible.

Peer-to-Peer File Sharing: What Is It and How Does it Work?

P2P File Sharing – What is it Exactly?

Let’s say you wanted to download a file off the internet. The way you would go about doing that usually looks like this:

Without going into the technicalities, you asked Google to help you search the internet for a file. Google, in turn, ran through the different websites that might match your search and give you a list of suggestions to use. Websites are hosted on servers, so you just had a search engine send out information to servers about a client’s request (that’s you!). In other words, you used what is called the Client/Server model.

The Client/Server model is the model our internet is built on. P2P File sharing is different.

The Components of P2P File Sharing

The first difference between the Client/Server model and P2P File sharing is what you use to “search” with. In the example I gave above, you’re using sources found on the internet in every step of the process.

You don’t have Google as a software on your PC, you access it by going to the search engine’s URL. With P2P Sharing, you have to use software to do your search. This is something that you download and install on your computer. 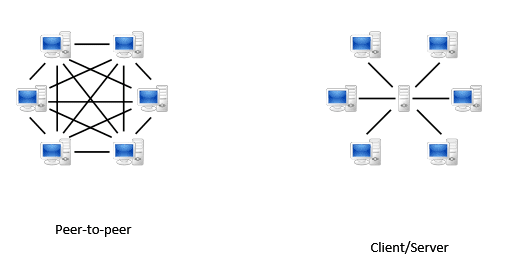 In the case of Google, searching for something means that you’re sending out requests to websites for information that you need. With P2P sharing, it’s not websites that you’re in communication with. When you search for a file on your P2P software, you’re looking at the files that other people have on their computer.

In other words, you’re not requesting information off of a server, you’re requesting it off of other computers just like yours. When you download the file, you then become someone that other people can connect to for that very file. This means that everyone acts as both a client and a server. The more people that connect to each other this way, the bigger the P2P network is.

There are three terms you should understand when it comes to P2P File sharing: Leechers, seeders, and peers.

Leechers are people who have used P2P sharing to download a file but aren’t sharing it back. If you download something off of a P2P File Sharing network and then disconnect when you’re done, you would be a leecher.

Seeders are people who have downloaded a file off of a P2P file sharing network and are sharing it back (which means they’re online). The more seeders a file has, the better it is for other people to get full access to the file and the fast the downloads become.

Peers are people who are currently downloading the file themselves. A peer won’t have the full file available on their computer yet, but they do count as semi-seeders to the portion of the file they have so far. Peers can either become seeders or leechers.

As a rule of thumb, the more seeders a file has the better it is for downloads. If a file has no seeders, you’re probably not going to be able to get the full download.

The first P2P file sharing software to take the world by storm was Napster (1999 – 2001). Napster let people download MP3 files for no cost. While it had a central database that stored all the information about the users and the files available to download, you were still connecting to other user’s computers to get the file. While Napster was shut down in 2001 for copyright infringement, other networks were making an appearance.

Soon networks like Morpheus, Kazaa, and Gnutella were allowing people to share music, movies, software, and files. The most famous protocol for P2P sharing showed up in 2001 as well: BitTorrent.

When BitTorrent came around, it kind of revolutionized P2P sharing. Before BitTorrent, a lot of P2P clients (software) used protocols that needed a central index server. That means that they needed a specific server where all of the information was indexed and stored.

When the BitTorrent protocol came around in 2001, files used to be downloaded as one big block. This meant that downloads took a lot of time, and you were at the risk of losing access to the file if the seeder you’re connected to suddenly goes offline.

There are many improvements that the BitTorrent protocol added to P2P sharing, but the most revolutionary was the separation of the file into hundreds of small chunks which are downloaded from more than one seeder. In turn, your BitTorrent client (software using the protocol) instantly becomes a seeder the moment you have a piece of the file.

The way this used to happen was simple: If you wanted to join a swarm (a group of computers downloading and uploading), you would have to download a .torrent file first and then load it into the BitTorrent client. The .torrent file contained information on how to find the peers (tracker) that are seeding this specific download.

Now, things are a little different. Magnet links have taken over where .torrent files used to reign.

A Magnet link is embedded on a webpage, which means you don’t have to download it and feed it to your BitTorrent Client. Magnet links can be shared in any way you could think of. They also promote the decentralization of P2P networks: Magnet links can still connect you to a peer without having a tracker.

You can check out our list for the 5 best BitTorrent clients here.

The Risks of P2P File Sharing

With great things come great responsibility, right? P2P File Sharing, while an awesome methodology for sharing information in a community-like structure, has a lot of risks.

In its purest form, P2P file sharing is you taking something off of someone’s computer and other people doing the same with yours. When computers connect to each other, information is passed between them that help identifies each computer.

There have been cases of hackers who stole names, birthdates, and even social security numbers using this connection. In other cases, people have been known to sneak viruses into their seeds, sending them out to the people who belong to the same swarm.

A less malicious risk is copyright laws. Unless you’re an international lawyer who specializes in copyright infringement, it could be very confusing trying to wrap your head around what is a legal and an illegal download. File sharing itself isn’t illegal, but there are some serious repercussions if you use it to download something illegally.

Since P2P file sharing is based on the idea of directly connecting with other computers, you need a way to engage in P2P sharing/Torrenting without exposing yourself to cyber threats. You need a way to torrent anonymously…You need a VPN.

A VPN encrypts your data and changes your IP to match whatever server you’ve chosen to connect to. If you’re using a VPN while P2P file sharing, you’re making sure that your personal information is safe.

Another good reason to use a VPN while torrenting is to hide the fact that you’re torrenting from your ISP. Some ISPs will start throttling your connection if they notice that you’re torrenting too much. VPNs encrypt your data to the point where even your ISP can’t see what it is that you’re doing. You can read this blog post to find out all of the reasons why Torrenters should be using a VPN at all times.

ExpressVPN is by far the best VPN to use for Torrenting and for your normal internet usage. It has a 256-bit AES encryption for your data and keeps absolutely zero records of your logs and information. ExpressVPN has over 2000 servers in more than 94 countries, all of which support P2P File Sharing. What’s great about ExpressVPN is that they have a 30-Day Money-Back guarantee, so you can test out the VPN before you decide to fully commit to it.

Other top VPNs you could use for P2P file sharing and torrenting are listed below:

P2P File Sharing is mostly used in Torrenting and downloading files and media. However, there are actually a lot of common apps that people use that rely on P2P sharing. Apps like Airbnb, Uber, Angel List, and eBay rely on P2P technology as a basis of their business.

Let me know in the comment section if this guide helped explain P2P file sharing. I’m always up for suggestions on what to explain next!